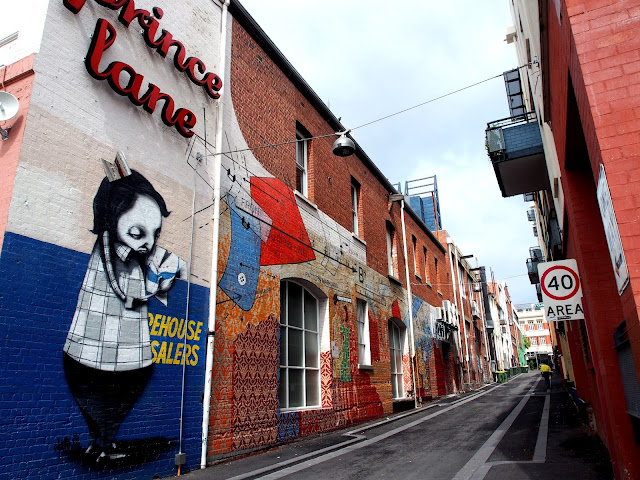 Standing at the Wellington St. entrance to Prince Lane, the mural titled 'Lost Giants' by renowned artist Stormie Mills seems to have acquired a princely crown since I last saw him! The laneway which runs from Wellington through to Murray St. has had a colourful facelift in preparation for it's forthcoming role as one of the thoroughfares from Northbridge into the city when the Perth City Link Project is completed mid 2014. Running parallel with King St., the interweaving paper dress making patterns and design murals by WA artists Clare McFarlane, Denise Brown, Stephen Genovese, Jae Criddle, Paul Caporn and Leanne Bray depict the strong connection to the fashion industry. It's a long lane so the addition of new lighting and security cameras are a definite plus on the safety side. I couldn't swear to the safety of my sanity these days, but most people wouldn't notice a difference :)) TGIF hope it's a good one, take care.....