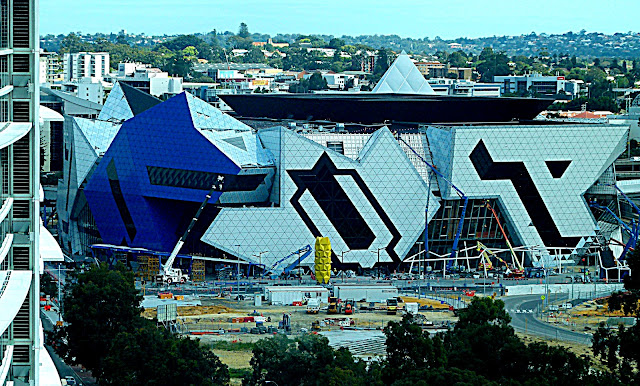 The first time I posted the new Perth Arena in June last year it looked like this. Despite many problems, mainly budget blowouts, it's almost fini..which is a good thing because the grand opening on the 10th of November is only six weeks away! I'll bet there are a lot of very anxious contractors, politicians and agents who will be holding their breath until the curtain goes up on opening act George Michael! With a seating capacity of 15,000 for concerts and 12,000 for sporting events like the Hopman Cup in December, it's no small affair, and as if the design of the building isn't dramatic enough..we have here the 10.5 m high Totem which will no doubt be called anything from the 'pineapple' to the 'corn-cob' if the sculpture in Forrest Chase named 'Grow Your Own' by it's creator, but the 'Cactus' by Perthites is anything to go by. I'm reserving my judgement until I see it in action, moving parts, flashing lights and all. I took these shots (through glass) yesterday from the 7th floor of 140 William St., nice view of the city from up there. Happy Sunday, hope it's a good one, take care and stay safe.. 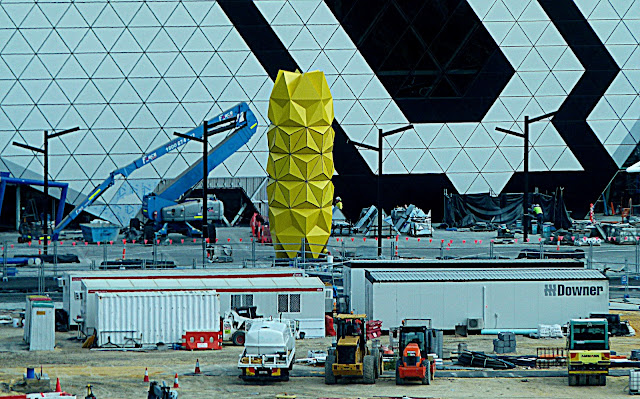